You are here: Home1 / General

In recent days, a building located on Carrer dels Arbres with a mural by Cuní (Eduard Alonso Cuní), a potter born in Mollet del Vallès in 1927, has been demolished.

The good disposition of the architect and the person in charge of the demolition has allowed the Museum to recover some pieces of the stoneware panels that made up the façade, as well as fragments of the part with more volume of the whole.

The donation to the Museum by Jordi Ballesteros of the piece with the signature of the author that had already been collected by him, will complete the set collected.

These pieces will be incorporated into the Museum’s collection, and will be documented, cataloged and kept in the safety and conservation conditions that guarantee their preservation.

At the same time as this panel, a fragment of the balcony railing of the house on the corner of Carrer dels Arbres / Avinguda Martí Pujol, a modernist house by the architect of Badalona, Joan Amigó, has also been preserved. 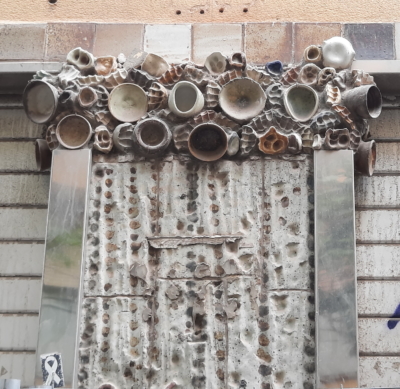 This Tuesday, June 14th, from 10 am, the sale of the tickets of the Summer Nights of the Museum at the Factory of Anís del Mono, will begin in our web site.

This year we offer you four different proposals that go from the classical music of Duo Enol to the crazy rumba of the Muchacho & los Sobrinos, and from the popular French music with a spark of American swing of Pierre-Arnaud Quartet to the Latin Jazz of Enma Fernández.

The ticket includes the tour of the factory and the concert, and has a price of €15. There’s a límit of 4 tickets per person.

On this occasion we are offering three different groups of guided tour, in a different schedule, that will get into the factory separately. Two of them will be made in Catalan and one in Castilian. The concert will start as soon as the three groups have finished their visit.

In the following link you will find the list of groups and schedules:

As every year, we join the celebration presenting something new related to the Historical Archive of the City of Badalona (AHBDN).

On this occasion, we make available to users the updated catalog of the Badalona City Council collection. The documentation of this fund covers the period from the 19th century to 1945, and allows us to trace the municipal management, with the many aspects that depend on it, for almost 150 years.

Some of this documentation, such as the record books, is already available online on this website. The rest can be consulted in person on Tuesdays and Wednesdays from 10 am to 2 pm and on Wednesdays from 5 pm to 8 pm (it is advisable to make an appointment in advance).

Here you can download the agenda of activities of the Museum where you will find our proposals for the coming months.

For further information you can call 933 841 750 or email info@museudebadalona.cat 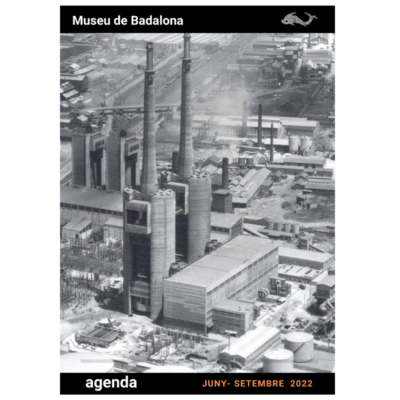 The heat is back and so is a Badalonian summer classic, such as the Museum’s Summer Nights at the Anís del Mono. Once again, we are filling one of the city’s most unique heritage spaces with music, with a unique evening that will allow you to discover the history of this iconic brand and enjoy an outdoor concert in the courtyard.

We will publish the program soon, but meanwhile you can start booking the dates:

Tickets, which cost € 15 per person, can be purchased directly on this website from Tuesday 14th June. 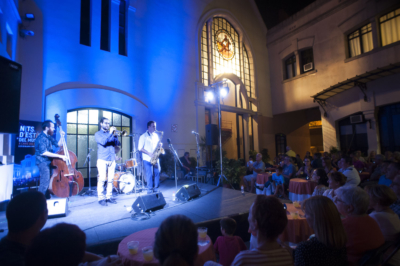 This spring we are moving forward with the European Archaology Days (EAD), which will be held on the weekend of June 18th and 19th, with a short series of lectures about archeology in our city.

For three Tuesdays we will review some of the most important interventions that have taken place recently in Badalona and we will know the data and information they have provided about the history of the ancient city of Baetulo. Admission is free until capacity is reached.

In addition to the lectures, on Sunday 19th June – in the middle of the EAD weekend – we offer the possibility of visiting a new archeological space, still without musealize, of the last ones that have joined the Museum, in Carrer Coll i Pujol . If you are interested in participating in this visit, you can book your place at the following links.

Admission is free and places are very limited. Registration from June 1st. 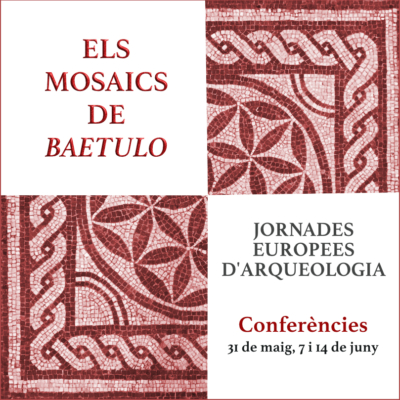 INDIVIDUAL. We offer a guided tour every third Sunday of the month (except July and August and, in exceptional cases, Holy Week). Check our schedule to see the specific dates. Tickets for this activity can be purchased directly on this website, in the ACTIVITIES section.

The entry for this activity is personal and requires the data of each of the attendees (name, surname and ID number).

Admission is free for children under 7 years old.

The maximum number of entries per management is 4. 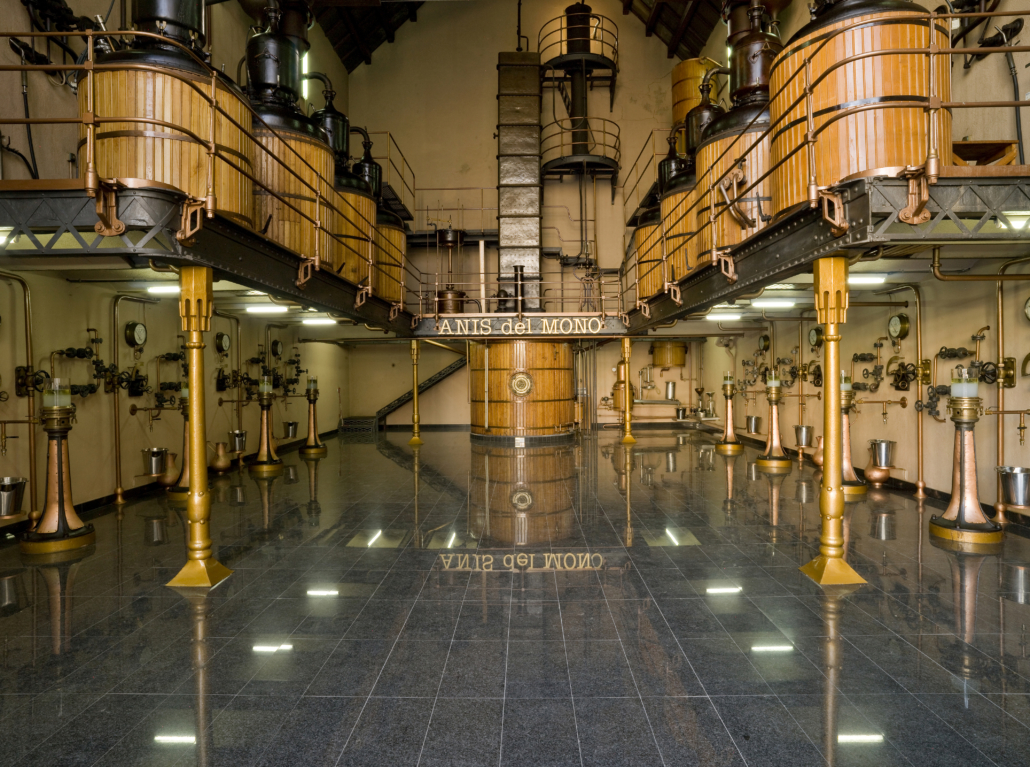 The Museum of Badalona has joined the SignemMuseus project aimed at promoting inclusive culture through a program of guided tours of Catalan museums by deaf people signing in Catalan Sign Language (LSC).

The initiative is part of the European project POCTEFA-ARTIS (Art for social inclusion), promoted by the Department of Culture of the Generalitat de Catalunya through the Museum Service and Protection of Movable Property, together with the Group of the Deaf people from Vic and the region in coordination with the MEV Museum of Medieval Art in Vic.

The uniqueness of the proposal lies in the fact that it gives prominence and a job opportunity to the group of deaf people, making them both mediators and guides of the Museum and co-authors of a new activity built on the visits that they are usually performed for hearing people.

For this second pilot test – the pioneer was held at the MEV, Museum of Medieval Art of Vic – which will take place during the months of March and April, five visits have been scheduled to different Catalan museums that will be in charge of Martu Pericas, art historian, and Sergio Cuadros, electronic and automatic engineer.

Beyond these five proposals, there is a joint desire that this proposal be extended to other facilities in the near future and become part of the stable programming of museums, thus promoting the employment inclusion of deaf people. 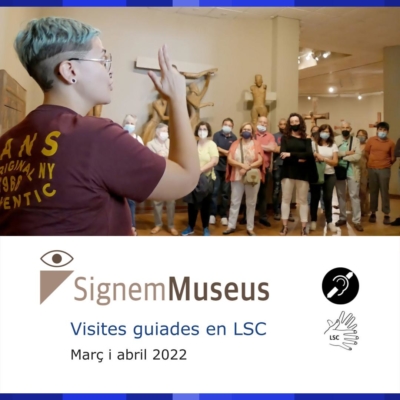 Once again, the Museum is collaborating with the Badalona Medieval Festival, hosting the lecture “Blasonar Badalona: els escuts de la ciutat” given by the historian Nil Rider, next Tuesday, March 29th, at 7 p.m.

Admission is free until capacity is reached. 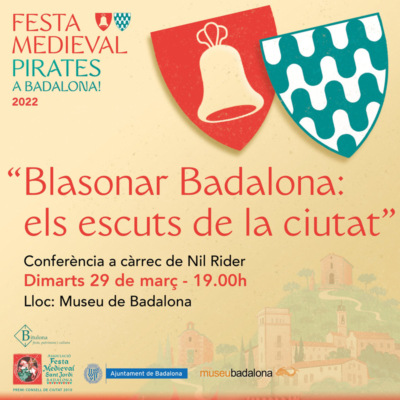 The Gran Teatre del Liceu has organized, on the occasion of the 175th anniversary of its foundation, a complete calendar of activities that will be carried out throughout Catalonia during the 2021/2022 and 2022/2023 seasons.

The aim is to share the years of the Theater’s history with people and organizations that have somehow contributed to its construction and growth. With this in mind, the “Museus i Liceu: una història compartida” project was also born, which invites museums and collections in Catalonia to take part in the ephemeris by exhibiting some pieces related to Barcelona’s great lyrical theater.

Our Museum joins the initiative, in which a total of 119 Catalan cultural centers participate, showing two pieces closely linked to the Liceu: a bowler hat that belonged to Vicenç Bosch and a stole that Vicenta Romeva Romeva used to wear when she attended this opera house. We invite you to discover them until April 17th. 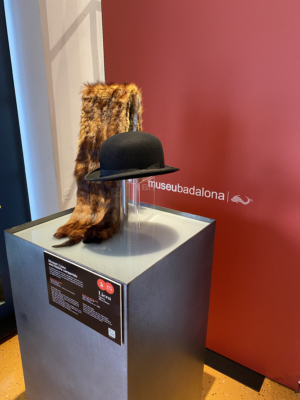 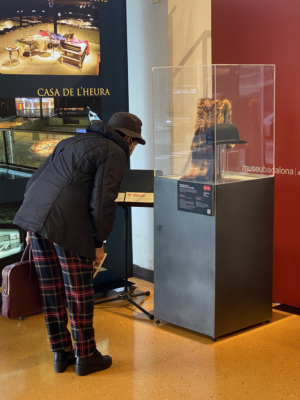 The lost factories of the maritime front

The lost factories of the maritime front