Now that the celebrations of All Saints’ Day and Day of the Dead (November 2ND) are approaching, we want to share with you some curiosities about the epitaphs with which the ancient Romans marked the graves of their loved ones.

Sit Tibi Terra Levis (STTL), “may the earth be light on you”, is undoubtedly one of the most popular Latin expressions. We find it documented in the 1st and 2nd centuries AD, replacing an earlier formula: Hic situs or Sita est (HSE), “here he or she rests”. Of this last inscription, not so well known, we have precisely a witness in the Museum where you can see on display a fragment of a tombstone from the Republican era that was found in a fill, during the connection works that were carried out in the Roman Baths-Decumanus space, in 2008. 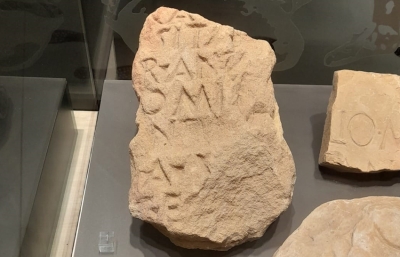 Tombstone fragment with incomplete inscription. Last quarter of the first century BC (MB 13290). Museum of Badalona

This expression, however, is not as well-known as the one that replaced it, the popular Sit Tibi Terra Levis, which some people still use today. The meaning of the expression shows the hope of those who remain that the deceased will not be long in the grave, bearing the weight of the earth, before passing on to a better life, in the case of the Roman world, in the underworld.

The first to use this phrase were the Greeks, since its origin can be found in the play Alcestes (438 BC) by the great Greek tragic poet Euripides. The sentence made a fortune and, with variations, was repeated by several classical authors, both Greek and Latin. This is how we see it in a poem by Marcial (Epigrams, 9.29) where in the last verse it is said: “May the earth be light on you and may a soft sand cover you, lest the dogs could not dig up the bones”. 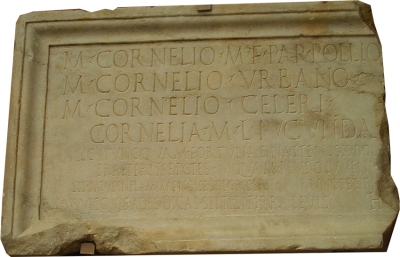 We find several versions of this epitaph such as: S·E·T·L, may the earth be light on him; or T·L·S, abbreviated, that the earth be light. As a curiosity, a different expression is documented much more frequently in Roman Africa, the meaning of which is very similar to the epitaph that would end up being adapted by the Christian world. It is the abbreviation OTBQ (Ossa Tibi Bene Quiescant), which could be translated as “may your bones rest well”.

In the 4th century AD is when the Christian locution R.I.P. (Requiescat In Pace) which remembers that sentence, begins to appear. In the 5th century AD, the habit of placing epitaphs completely disappeared, but it began to recover from the s. XVIII, when so much is used in the Latin version R.I.P. as in Catalan or Castilian D.E.P. (Rest in peace). 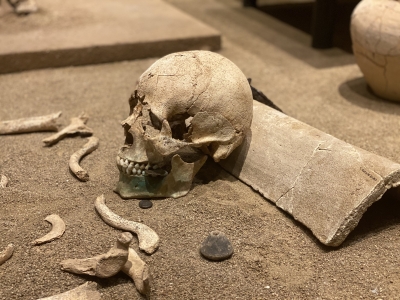 Detail of the burial of a 25-year-old woman. S. I AD Exhibition “Baetulo, Roman city”. Museum of Badalona

Whole burial of the woman, with the skeletal remains of an infant. S. I AD Museum of Badalona