Corpus Christi, a holiday of the Catholic Church dedicated to the Eucharist, is celebrated this year on Thursday, June 11th. Of medieval origin, it was instituted by Pope Urban IV in 1262, through the bull Transiturus de hoc mundo. The feast was decreed for the Thursday after the octave of Pentecost and was first celebrated on June 5th, 1249. In the 21st century, six hundred years later, it is still a religious, social, cultural, and festive event of great significance within the Catholic world.

Many elements that are part of the parades of the major festivals – “enramades”, the bestiary and other traditional and pagan entertainments – were originated in the Corpus Christi processions, in which the popular classes introduced elements to the religious festival.

For some years now, the celebration of Corpus Christi has regained momentum and is once again present in popular festivities. In 1997, the Socarrel group began making carpets with dyed sawdust, first in Carrer de Dalt and, very soon, in other streets in Dalt de la Vila, and also incorporated an event that had never been done in Badalona: “l’ou com balla”, in the fountain of the courtyard of the rectory of Santa Maria.

This year, like so many other festivities, it will have to be celebrated in a different way. From the Museum, we invite you to do so with photographs. 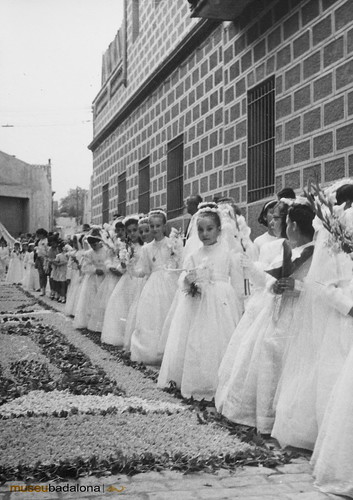 The feast of the Virgin of Carme
Scroll to top